7 Reasons You Should Invest in Server Virtualization

The number of servers required is reduced, so savings from hardware purchases is realized. This consolidation, in turn, reduces the footprint of your data center, minimizing need for power, cooling, and equipment. This also is a benefit to the environment, helping your organization ‘Go Green.’

Servers running on a single machine reduces the amount of time administrators have to spend configuring multiple servers, mainly due to a common interface. It’s also possible to run multiple operating systems on the same machine. Providing security for a single machine running multiple servers is also much easier. And because creating replicas of your virtual servers is easy, testing security updates becomes easier and safer, before unleashing them on the ‘real’ environment.

Efficient Use of Hardware

Servers running virtual machines realize as much as 80% utilization of resources instead of the 15% typical of standalone servers. Running multiple machines on a single server makes greater use of the available CPUs, RAM and other overhead. While a server capable of virtualization may be more expensive, the hardware it replaces gives a higher ROI. And once you maximize these resources, increasing CPUs, drives and RAM is a snap.

Let’s face it. Every IT environment has a few legacy systems running on older hardware. Since they still work, and you can’t buy new hardware to run them on, most IT managers just leave them be and hope for the best. In a virtual environment, the underlying OS and applications are encapsulated, so you can port these legacy systems to new hardware and extend their life.

In a typical environment, there is one application per server. In addition to being less efficient from a hardware perspective, it’s also not the most effective use of your software resources. With server virtualization, you still reap the benefits of application isolation without the waste of unused resources. In addition, as deploying software in a virtual environment becomes more second nature, you can begin deploying along functional lines instead of a traditional server/application approach.

Disaster recovery in a virtual environment becomes easier because taking a ‘snapshot’ of your environment is a built-in benefit of server virtualization. Moving this snapshot from one machine to another, either because of a disaster, or simply to upgrade hardware is trivial. Also, you can improve business continuity by hosting your virtual servers in the cloud.

Move Your Data Center to the Cloud

This leads straight into the best reason for server virtualization; the ease at which you can move your environment to the cloud. This increases each of the previous benefits. Your infrastructure and data center foot-print is minimized. Administration becomes easier using an integrated interface. The ability to park your servers in a co-hosted environment increases the efficiency of your hardware investment. And because your servers are in the cloud, in a secure environment with redundant systems monitored 24/7, you can be assured of business continuity.

Migrating to the Cloud

There are a variety of options when it comes to cloud hosting and it’s easy to feel overwhelmed. Consult with an IT Professional, like Element IT Solutions to chose which option is right for you.

Protecting Your Data in the Cloud

With mobile devices and virtual workplaces on the rise, more and more businesses are seeing the value of storing their data in the cloud. Reduced costs, mobility and data accessibility are all attractive benefits of cloud computing but with this type of convenience, comes a concern for security. With all the recent news about hacking, many wonder how to keep their data safe in the cloud.

Making the decision to move your content to the cloud can be tough. Afterall, the most valuable asset you have is your data. When security questions arise, it’s important to realize that the security of your data begins with your company procedures and employees. Here are a few tips on how you can protect your data in the cloud.

Securing Your Data From the Inside – Out

Password Policies: A chain is only as strong as its weakest link. Imagine your business’s data security relying on an employee using their birthday for a password? Bad idea.

Password policies are the first defense for your data. These protocols should be strong and inviolable. No one likes cryptic passwords and having it change them often, but there is a reason for these strategies. These procedures are important, but they take time, expertise and planning to implement and maintain.

Permission Granted: At a higher level are access policies and permissions. It would be simple to give everyone the same access to all data, but is that the best policy? A hierarchical system of data access is not only crucial to protecting your data, but critical in identifying and closing any breach and weakness. Planning, implementing and maintaining this strategy is a time consuming process, but necessary for your data’s security.

Use Protection: Most businesses utilize virus protection on their computers. But is that enough? An advantage to storing data in the cloud is its accessibility from different locations and platforms. Computers at your company may be protected, but what about employees who access data from their tablet after downloading an app from Facebook? Or who gets into the company’s intranet on vacation in the Caribbean? Virus protection policies are as important as access and passwords. The protection of your data in the cloud needs to be bulletproof and that is more complex than protecting local computers on your network.

Encryption: Encryption is a term that many hear and few understand. It’s easy to use terms such as SSL and 128-bit encryption, but what does that mean, and more importantly, how is it implemented? When accessing your data from the cloud, it is passing through dozens of networks, backbones and routers, all of which are susceptible to hacking. Your data needs to be protected not only at both ends, but while in transit. Encryption ensures that if the data is intercepted, it won’t be usable to the hacker, but encryption is a highly skilled specialty.

Conduct an Audit: Another factor in having your data and applications in the cloud is the need to monitor and audit access to that data. Who is reading it? If there is a breach, where and how did it occur? A complete audit trail of your data’s access is crucial in protecting it, and in apprehending someone if a breach does occur.

Is Your Data at Risk?

Even though your data resides in the cloud, the security of that data begins with your employees, computers and networks. Securing this environment and protecting it with access methods, firewalls, and password policies can be a complicated and time consuming process. However, the risk of losing of jeopardizing the integrity of that data can have devastating affects. Speak to an IT Professional, like Element IT Solutions to discuss the best options for your data security. 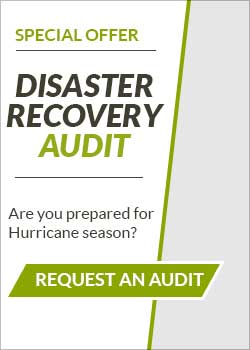